Skip to content
Home » Diamonds » IGI vs GIA Diamond Reports: Which is Best? The purpose of their reports is to give you confidence in the diamond’s quality, so you’ll know its carat weight, color, clarity, and more.

The main difference between the IGI and the GIA is the GIA is often the most regarded grading lab in the world, known for rigorous systems for assessing diamonds. The IGI is renowned for reports on lab-grown diamonds but doesn’t have the same reputation in grading natural ones.

Let’s compare the IGI versus GIA so you’ll learn which is best for you. 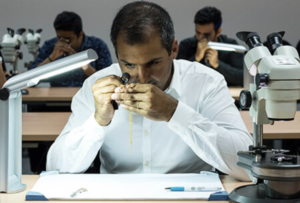 The IGI is one of the largest independent gem labs in the world. It was founded in 1975 and is headquartered in Antwerp, Belgium.

Its location places it in proximity to many of the mines where diamonds are sourced.

Their reports are common in Europe and Asia. In the United States, it found a market serving jewelry retailers like Jared, Kay, and Zales.

By offering low prices for grading reports and fast turnaround times, they formed productive partnerships with these vendors.

In addition to diamond reports, the IGI also conducts research on gems and provides education to the industry.

If you’re exploring an IGI diamond, ask the retailer for its report number. You can verify the IGI report on its website here by typing in the serial number.

For example, here’s a one-carat diamond graded by the IGI. The number on the report and diamond match, so I’m certain of its qualities.

IGI diamond certifications have a similar format as ones from other institutions such as the HRD, GCAL, or the GSI.

At the top of the report, it identifies the diamond as lab-grown or natural, including its:

The traits that most affect a diamond’s value are the four Cs of color, cut, carat weight, and clarity. IGI reports have a section dedicated to these qualities.

To help buyers who aren’t familiar with where those grades fall along the spectrum, the reports include a scale. For example, the IGI diamonds are graded on a scale of flawless to I3 clarity.

You can view where the diamond’s clarity grade falls along that scale.

The same is true of color. The scale shows “colorless” diamonds are graded D-F, and the spectrum continues to S-Z for “light” colored diamonds.

The “Additional Grading Information” section details the other important traits.

Combined with the clarity characteristics plot in the bottom left, it gives you the complete picture of what you need to know about the diamond. 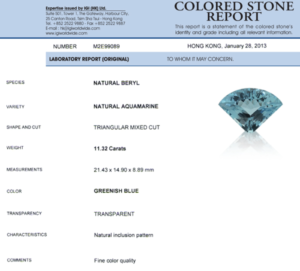 They follow a similar process by first determining its origin and whether it has any artificial treatments.

The report has many similarities compared to ones for natural diamonds, but they often include an image so you’ll know its color shade.

What is the GIA?

The GIA is the preeminent institution for evaluating the quality of diamonds. Founded in 1931, it’s a nonprofit known for research on gems and reports on natural diamonds.

It also provides assessments on:

Many of the most popular online diamond vendors, such as James Allen and Blue Nile, have their diamonds certified by the GIA.

Grading a diamond along the four Cs is universal, but the GIA developed these standards.

When a diamond is sent to be graded by the GIA, they first determine whether it’s natural or lab-grown.

Along with evaluating the diamond across the four Cs, they check for any clarity-enhancement procedures that attempt to cover up inclusions.

They consolidate these notes and more into a report that looks similar to one from the IGI. 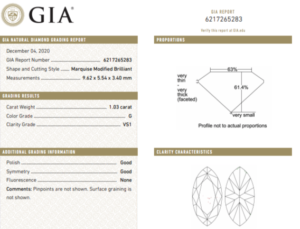 To illustrates, this diamond was graded by the GIA.

It returned this report, which matches the one on the vendor’s site. You read GIA and IGI diamond certifications in a similar way.

The “Grading Results” section details its clarity, cut, color, and carat weight. The section below notes its polish, symmetry, and fluorescence, including additional notes about inclusions.

For a complete picture of the flaws on a GIA diamond, examine both the inclusion plot at the bottom of the certificate and the comments to the left.

Like the IGI, the GIA certifies colored diamonds. This sample report from the GIA for a pear-cut, fancy blue diamond includes an image at the top so the buyer knows its color. 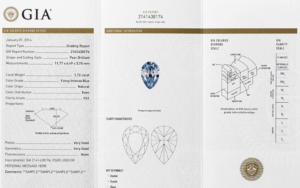 While the report still includes familiar sections like the inclusion plot and four Cs, it also shows how they determine color using the GIA colored diamond scale.

What are the Differences Between the IGI and GIA?

The GIA’s standards are known as the most rigorous relative to other grading institutions, including the IGI.

Jewelry Insurance Issues notes the AGS and GIA are considered the most reliable.

In a well-known study, Rapaport sent diamonds to several of the leading grading labs and found the GIA as the most strict lab, followed by the IGI.

Strict criteria are generally in the interest of the buyer but not always the seller because a diamond with higher grades sells for a premium.

As a rule of thumb, expect the IGI to designate a diamond one or two grades higher than the GIA in categories like color and clarity.

For example, if the GIA decides a diamond has an H or I color and VS1 clarity, the IGI may give it an G color and VVS2 clarity.

Or if the GIA grades its cut as “good”, the IGI may determine it’s “very good.” 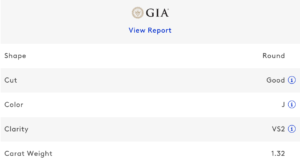 In other cases, there may be a difference across only one or two of these traits.

It’s not because the IGI is intentionally applying loose standards. There are no objective criteria for where a diamond’s clarity, cut, and color land on the scale.

Expert gemologists at the IGI and GIA compare the diamond to a given standard and decide where it lands. If its color is closest to the standard used as a J color, they’ll designate it the same.

Some claim the IGI’s United States locations are more rigorous than international ones.

The problem with this claim is the U.S. locations can honor the evaluation from international graders instead of taking an objective look.

On the other hand, the GIA ignores any markings or other assessments and instead gives it a fresh examination.

Regardless of whether the GIA or IGI certifies a diamond, carat weight is objective.

You shouldn’t expect any difference in the carat weight no matter which lab grades it.

While the IGI isn’t known to be as reliable as the GIA in grading natural diamonds, it’s more respected by the industry for reports on lab-grown diamonds.

In fact, many of the lab-grown diamonds at popular retailers like James Allen are certified by the IGI.

One reason they’re regarded for these reports is the IGI was the first major organization to certify the color and cut of lab-grown diamonds.

Below is an example for this lab-grown diamond. The GIA also provides certifications for lab-grown diamonds, but they aren’t as popular as the ones for natural diamonds.

The report also looks similar compared to one for a natural diamond and features most of the same information.

But the format at the top clearly distinguishes it from a natural diamond report, using the letters “LGDR” for “lab-grown diamond report.”

Even the subheadings include the phrase “laboratory-grown,” so there’s no mistaking it with their other reports.

In the comments section, it states the process by which the diamond was created.

While I recommend GIA certifications for natural diamonds, an IGI report is sufficient for a lab-grown one.

There’s a difference between a diamond report and appraisal. A report focuses on describing the qualities of a diamond such as its:

An appraisal, on the other hand, seeks to determine its monetary value.

The GIA doesn’t provide appraisals. In fact, the organization says it’s not involved in jewelry pricing in any way.

This prevents any conflict of interest, where the GIA could have incentive to inflate the grade of a diamond and cause it to be appraised at a higher value.

As a research and educational institution, its goal is to provide objective analysis of gems instead of determining how much they’re worth.

But the IGI does assess the value of a diamond. They’ve partnered with several third-party diamond appraisers and even have co-branded reports.

Take a look at the example below. It includes much of the same information found in their diamond reports, but there’s also an image of the complete ring.

The reason they provide this service is many jewelry insurers require appraisals from another organization for high-value pieces.

I recommend not receiving an appraisal from the organization that certified it. Instead, choose one from this list of the GIA’s recommended appraisers.

How Does the Report Affect a Diamond’s Price?

The name of the organization at the top of a diamond report affects a diamond’s price in multiple ways.

The first is that if a diamond is graded as higher quality, it will often sell for a higher price.

For example, if all else is equal, a diamond with VVS1 clarity will sell for more than one with VVS2 clarity.

Let’s look at how the exact clarity grade impacts the price of diamonds from James Allen by looking at ones with the following qualities: For the same quality diamond, except with a VVS1 clarity grade, is priced at $3,300.

This means more rigorous grading often results in a lower price for the buyer.

The second way a grading certificate impacts the price of a diamond is vendors charge a higher price for diamonds assessed by the GIA versus IGI.

GIA reports cost retailers more because of their strong reputation, and they know buyers are willing to pay more for a diamond graded by the GIA compared to other organizations. In fact, it sometimes costs between $150-$300 to have the GIA grade a diamond.

Diamonds from James Allen provide another helpful example of this idea.

We examined diamonds with the following grades:

Then we filtered them by GIA versus IGI certificates. This shows the premium that sellers charge for a GIA diamond.

Should You Buy an IGI or GIA Diamond? I recommend you buy a diamond graded by the GIA versus IGI unless it’s lab-grown. In that case, both certifications are sufficient.

The GIA is widely considered the most consistent diamond grading institution, and it’s important you have confidence in the quality of the assessment.

You’ll pay a premium for a GIA report compared to ones from other labs, but it’s worth the extra cost.

While there are jewelry retailers with better reputations than others, you should determine the quality of a diamond based on its GIA report, not the brand name of the vendor.