Skip to content
Home » Diamonds » I3 Diamonds: Are They Worth Buying?

Diamond clarity is an important consideration in your purchase. While there are many factors to balance in choosing the perfect diamond, such as cut, color, and carat weight, clarity impacts the overall quality of a diamond in multiple ways

If you’ve examined a number of diamonds, you’ve likely come across ones of various grades of clarity, including I3.

The “I” stands for “included,” and the number three indicates its position below the clarity grades of I1 and I2.

In this article, we’ll teach you everything you need to know about I3 diamonds and explain why you should select one with fewer inclusions.

What is an I3 Diamond?

An I3 diamond has a significant number of visible inclusions. Inclusions are defects or imperfections within a diamond that affect its brilliance, durability, and appearance. Examples of the inclusions found in an I3 diamond are: 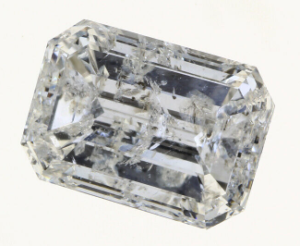 The Gemological Institute of America (GIA) developed a clarity scale that grades diamonds based on the number, type, and position of inclusions.

It’s in the last section where I3 diamonds are found. Not only are I3 diamonds in the bottom section of the scale, it places last within that section. This means it earns the lowest clarity grade given by the GIA and other organizations such as GSI.

I3 diamonds are real diamonds, and testing it with a diamond tester will validate that. Its composition is the same as other diamonds, but it has more flaws than ones with higher clarity grades.

Diamonds each graded I3 may have a different degree of inclusions. Some organizations have created additional levels within the included category such as I4, I5, and I6, but most reputable grading institutions stop at I3.

If a diamond has I3 clarity, you can be confident it’s heavily included, even if that’s the lowest on the scale.

Why Should You Avoid I3 Clarity Diamonds?

You should avoid I3 clarity diamonds because the inclusions will diminish its appearance to the naked eye and its ability to collect and return light. Additionally, inclusions cause durability issues and minimize the resale value.

Let’s explore each of these reasons in detail so you understand why you should opt against purchasing an I3 diamond.

The goal of many buyers is to find a diamond where inclusions are invisible to the naked eye. Flawless diamonds command a premium price because they’re rare.

In general, diamonds graded an SI1 clarity or higher are eye-clean.

There are inclusions such as twinning wisps, pinpoints, or etch channels present, but they can only be seen under magnification. 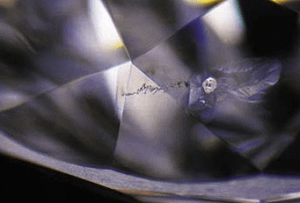 This isn’t true of I3 diamonds. The inclusions are often large, dark and easily visible at a glance.

There could be several small inclusions grouped together, or a large one.

There’s no mistaking an I3 diamond for having a clean look because no matter what angle you view it through, those inclusions stand out.

That’s why I3 diamonds are sometimes referred to as salt and pepper diamonds. The black specks scattered throughout the diamond, combined with its clear color, create this look.

Inclusions don’t only affect the appearance of a diamond. They inhibit its brilliance.

Diamonds with the best light performance have a quality cut with minimal inclusions. This pairing allows light to properly enter and exit the diamond. Feathers, twinning wisps, and other inclusions keep light from bouncing around and out of a diamond in the proper manner. 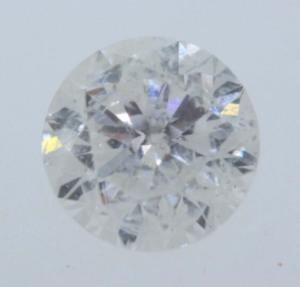 When you twirl the diamond, it won’t glimmer as much as a diamond with a higher clarity grade. While the low brilliance of a diamond less than 0.5 carats won’t be as noticeable, an I3 diamond used as the center stone in an engagement ring will appear dull.

That’s why we recommend engagement ring diamonds have a high degree of clarity, and it’s not as important for accents or other side stones.

I3 clarity diamonds can have problems with durability because inclusions weaken its structure.

Even if the appearance of dark spots on your diamond or its lack of brilliance wasn’t a problem, you should be concerned about how long the diamond will last.

Inclusions are more of an issue if they’re near the girdle or edges.

These weak points in the diamond are more vulnerable to chipping.

For example, feather inclusions are fractures in the diamond that look like a feather lodged inside. They can be black or white fissures. When located inside the diamond away from the girdle, it’s unlikely to cause durability issues, but if it’s near one of those positions, the diamond could crack if dropped or hit against a hard surface. You should avoid diamonds with those types of inclusions.

The same is true of cavities, laser drill holes, and knots. They aren’t a problem in every instance, but large ones near weak areas hurt the structure of your diamond.

You shouldn’t buy I3 diamonds with the expectation you can profit from a resale. Diamonds often don’t increase in value, but buyers still trade them in for an upgrade.

I3 diamonds have minimal resale value. The excessive number of inclusions means there’s not a high demand for them. Additionally, there are plenty to be found wherever diamonds are sourced, so there’s not a shortage of supply.

The general rule for resale value is a jewelry store could pay you between 20 and 50 percent of the original purchase price. For an I3 diamond, you should expect to be on the lower end of that range if you do find a potential buyer. You’ll recoup some of the cost you paid initially, but you’ll still be at a significant loss.

How Much Do I3 Diamonds Cost?

All else being equal, I3 diamonds are less expensive than ones of higher clarity grades. The price goes up every grade higher a diamond receives. You could expect a small price increase from an I3 diamond to an I2 and an I2 to an I1.

Where the cost starts to jump significantly is when the clarity is SI2 and above.

As a comparison, you can expect to pay between $2,000-$3,400 for a diamond with those same qualities except for an I1 clarity grade. This shows the difference in price depending on the number and size of inclusions in a diamond.

Do I3 Diamonds Sparkle?

I3 diamonds have minimal sparkle because the inclusions limit the amount of light the diamond captures and reflects. Inclusions distort the way light travels through the diamond, so fewer blemishes mean more sparkle.
If you’re looking for a diamond with the most sparkle, we recommend prioritizing the quality of its cut and clarity. These are the most influential factors on a diamond’s light performance, and I3 diamonds have a low grade on the clarity scale.

The difference between I3 and I1 and I2 clarity diamonds is the number, type, position, and size of inclusions. Clarity is a subjective measurement, so the gemologist is taking into account all these factors to determine where in the included section of the clarity scale the diamond should land.

One gemologist might grade it an I2 clarity, while another gives it an I3 grade.

The distinctions between one level of clarity are difficult to determine to the naked eye. You could place an I2 and I3 diamond next to each other, and they may look identical. But magnification would show larger and darker inclusions in the I3 diamond.

Additionally, they’d be in more prominent positions where they’re more visible or leave the diamond susceptible to chipping.

In the images below, we can compare an I3 (left) and I1 (right) diamond. Both are heavily included, but the I3 diamond has dark marks scattered across its table, which are more noticeable. The I1 diamond has many of the same type of inclusions, but they’re more transparent.

The reason they were graded differently is likely not because of the number and type of inclusions but because of their visibility in the I3 diamond.

Should You Avoid Buying an I3 Diamond?

We recommend buying a diamond with a higher clarity than I3 because the high amounts of inclusions aren’t worth it.

That doesn’t mean you have to buy on the opposite end of the spectrum and pay the premium for a flawless diamond. Instead, diamonds with the best value are ones with inclusions not visible to the naked eye but also avoid the downsides associated with I3 diamonds.

In most instances, diamonds with an SI1 clarity grade or above are eye-clean. If you’re purchasing a diamond with a step-cut, such as an emerald or baguette cut, you may want to choose one with a clarity of VS2 or above because they don’t hide inclusions as well. Clarity grades of SI1 or above balance the lower prices caused by inclusions with the quality of an eye-clean diamond.

This is especially true of center diamonds for an engagement ring.

While many buyers choose lower-quality diamonds as accents or as part of a halo, we recommend staying at I1 or above. The inclusions present in I1 diamonds won’t steal the ring’s shine or make it appear dull. You’ll also save more that you can put toward the main diamond.

I3 diamonds have the potential to detract from the overall piece, so it’s best to avoid these heavily included diamonds anywhere on your ring.